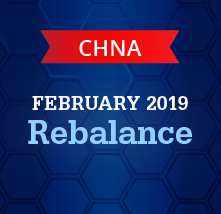 February 11th marked the semi-annual rebalance and reconstitution of the China BioPharma ETF’s (Nasdaq: CHNA) underlying index. This happens in a few steps.

STEP 1
A committee of advisors that oversees the index gets together and determines the reconstitution, which means they decide if any new companies should be added.

For the February meeting, the committee has added three new companies:

These additions replace Essex Bio-technology (HKEX: 1061) and Lee’s Pharmaceutical Holdings (HKEX: 950), which at the time of the review did not meet the index’s minimum liquidity threshold. Essex and Lee’s will be eligible for re-inclusion during future semi-annual meetings.

STEP 2
Once the index’s holdings have been finalized, a rebalance occurs according to the index’s modified equal-weighting methodology. Each constituent is weighted equally, subject to the following adjustments applied depending on a company’s market capitalization to emphasize the role of larger companies.

STEP 3
CHNA ETF then places trades to replicate those changes as closely as possible. View all holdings of the China BioPharma ETF.

As of the rebalance, the China BioPharma ETF now has 29 holdings compared to 28 during the previous six months.

To help the fund’s investors and followers learn more about the companies, we have provided a brief background of their work and what sets them apart. The CHNA ETF is thrilled to welcome each of them to the fund.

Innovent Biologics is based in Suzhou, China, and has been active in the research and development of biologic medicines since the company was founded in 2011. Biologics are different from traditional chemical drugs and tend to be more difficult to make because they are derived and produced from natural living organisms such as humans, animals, or microorganisms. In China, they are not yet as common as they are in the west. For example, Innovent’s Chief Operating Officer Qinwei Zhou recently mentioned during a presentation at the Endpoints/Pharmcube US-China Biopharma Innovation and Investment Summit that sales of monoclonal antibodies, one type of biologic, were only $1.7 billion USD in China in 2017 compared to $104 billion for the rest of the world.

The company already has one biologic medicine approved in China. On December 27th, 2018, Innovent’s anti-PD1 inhibitor sintilimab (trade name Tyvyt) was approved by the National Medical Products Administration (NMPA) for the treatment of classical Hodgkin lymphoma. This drug is in the same class as other well-known PD-1 inhibitors like Merck’s Keytruda and Bristol-Myers Squibb’s Opdivo. Sintilimab is also in phase 3 trials for non-small cell lung cancer, esophageal cancer, and gastric cancer. Innovent is currently developing 20 innovative medicines, covering four major disease areas: oncology, ophthalmology, autoimmunity, and cardiovascular diseases. This includes many biosimilars (the equivalent to a generic of a biologic) such as ones that mimic the popular medicines Rituxan, Avastin, and Humira.

One impressive thing about Innovent is the number of partnerships it has struck with global pharmaceutical companies. The largest is with Eli Lilly. Across two different deals, Lilly has paid Innovent $56 million upfront and is offering up to $1.4 billion in potential milestones. The partnership covers the now approved sintilimab and other cancer medicines such as a cMet inhibitor and bispecific antibodies. Cancer is a specialty of Innovent – three cancer drugs it has discovered are approved for clinical trials in the United States. In addition to Lilly, Innovent has partnerships with Adimab, Hamni, and Incyte. The Incyte deal was announced in December of 2018 and allows Innovent to develop Incyte’s pemigatinib (FGFR1/2/3 inhibitor), itacitinib (JAK1 inhibitor) and parsaclisib (PI3Kδ inhibitor) in China.

Shanghai Junshi Biosciences was founded in 2012 and is based in the Zhangjiang Hi-Tech Park area of Shanghai. This is Shanghai’s equivalent to Kendall Square in Cambridge, where many biotech companies are centered. The company’s stock started trading on the Hong Kong Stock Exchange on December 24th, 2018. Like many entrepreneurs running Chinese biotech companies today, Junshi’s CEO Li Ning has extensive experience working in the industry globally. He earned his Ph.D. in preventative medicine from the University of Iowa, spent more than 12 years at the U.S. Food and Drug Administration, and also worked in industry as Vice President of Asia Regulatory Affairs for the French pharmaceutical giant Sanofi.

Like Innovent above, Junshi has been focused on the research and development of biologics. In fact, it was the first domestic Chinese company to earn approval for a PD-1 inhibitor from the National Medical Products Administration when its drug toripalimab (trade name Tuoyi) was approved for the treatment of advanced melanoma on December 17th, 2018. One thing that is interesting about the news is that Merck’s PD-1 inhibitor Keytruda was also approved in China for advanced melanoma so this indication might provide insights into how domestic Chinese companies compete against multinational imports. Junshi turned heads shortly after the December approval when it announced it would price Tuoyi at a deep discount to Keytruda, one-half to one-third the price depending on the patient’s body weight.

In addition to PD-1’s (which it is testing in up to 10 different cancer types), the company’s pipeline includes a PCSK9 inhibitor drug similar to Amgen’s Repatha that is in clinical trials for hyperlipidemia, a biosimilar to Humira that is in a pivotal study for rheumatoid arthritis, and an anti-BLyS monoclonal antibody that will be starting a trial for lupus. Preclinical (before human stage testing) candidates include cancer medicines targeting CTLA-4, TIGIT, and BTLA. Overall, Junshi currently has 13 biologics in its pipeline. The company also says it has ambitions to reach beyond these medicines and has highlighted small molecule drug discovery and antibody drug conjugates as other areas it will start to get into. In short, Junshi aims to be a leader in innovation-driven medicine.

The idea behind its business model is that there are many companies and researchers that have good ideas for new drugs and medical devices, but it is not realistic or efficient for all of them to build the infrastructure to discover, develop, and manufacture them on their own. With a partner like WuXi AppTec, they can benefit from the scale and knowhow the company has built up over time. Today WuXi AppTec has 18,000 employees, 28 R&D sites and offices worldwide, and 6 million square feet of office, laboratory and manufacturing space. By partnering with WuXi AppTec, a drug developer or medical device company inherits all the expertise and knowhow that comes with this footprint. In a way, it allows smaller companies to do drug development efficiently and almost virtually if they so choose.

WuXi AppTec originally went public in May of 2018 when it listed shares on the Shanghai Stock Exchange. It then subsequently launched a secondary listing on the Hong Kong Stock Exchange on December 12, 2018. In WuXi AppTec, you have a large service provider that is integral to drug and medical device development globally, but not all investors might be able to gain exposure to it since the company is only listed on stock exchanges in Shanghai and Hong Kong. This is a good example of why we created the China BioPharma ETF. The life sciences industry is changing rapidly and leaders are coming from all around the world. The China BioPharma ETF, with its China focus and access to companies listed on the Hong Kong Stock Exchange and Nasdaq, is please to add this major service provider to the fund.

Thank you for your interest in the China BioPharma ETF. Please be sure to sign up for email alerts below if you would like to receive notification of news, company interviews, and research that we publish from time to time.

Opinions expressed are those of the author or Funds and are subject to change, are not intended to be a forecast of future events, a guarantee of future results, nor investment advice. Fund holdings and allocations are subject to change at any time and should not be considered a recommendation to buy or sell any security. Adimab, Amgen, Bristol-Myers Squibb, Eli Lilly, Hamni, Incyte, Merck, and Sanofi are not a holding of the Fund or affiliated with the Fund. The Shanghai Stock Exchange is one of the major stock exchanges in Mainland China.