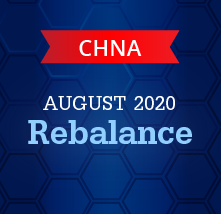 August 10th marked the semi-annual rebalance and reconstitution of the China BioPharma ETF’s (Nasdaq: CHNA) underlying index. This happens in a few steps.

STEP 1
A committee of advisors that oversees the index gets together and determines the reconstitution, which means they decide if any new companies should be added. For the August meeting, the committee has added fourteen new companies:

STEP 2
Once the index’s holdings have been finalized, a rebalance occurs according to the index’s modified equal weighting methodology. Each constituent is weighted equally, subject to the following adjustments applied depending on a company’s market capitalization to emphasize the role of larger companies.

STEP 3
CHNA ETF then places trades to replicate those changes as closely as possible. Investors in the ETF do not need to take any action since these trades by the fund automatically update their exposure. View all holdings of the China BioPharma ETF.

As of the rebalance, the China BioPharma ETF will have 50 holdings going forward.

To help the fund’s investors and followers learn more about the companies that have been added, we have provided a brief background of their work and what sets them apart. The CHNA ETF is thrilled to welcome each of them to the fund.

"The growth we are seeing in the number of companies that qualify for our index is a sign of today’s strong initial public offering (IPO) market for Chinese biotech companies and the improved trading liquidity of companies due to investor demand for the sector. This is exactly what we envisioned when we launched the index over two years ago. I believe the foundation has been set for a robust and innovative biotech sector to be a key component of China’s new economy."

— Brad Loncar, CEO of Loncar Investments and Chairman of the Index Committee 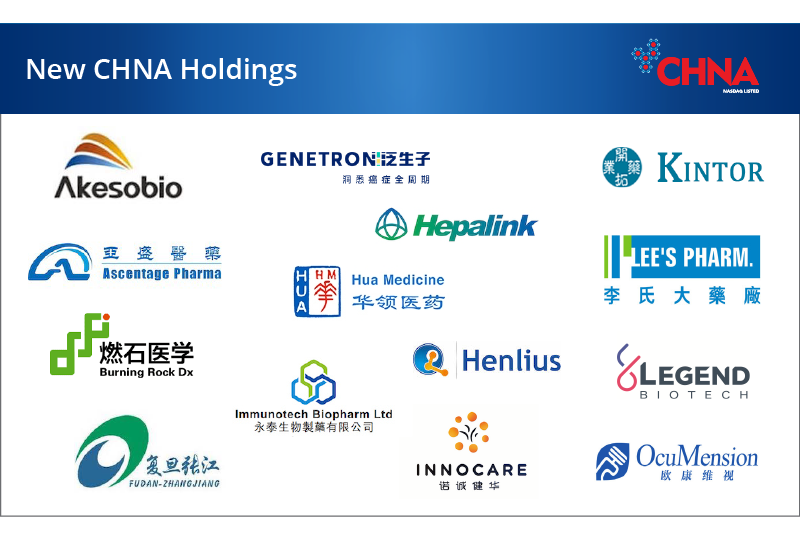 Akeso Biopharma (HKEX: 9926)
Akeso started trading on the Hong Kong Stock Exchange in April of 2020. This innovative research & development (R&D) based company has a deep pipeline with over 20 drugs in development, including 12 antibodies and six bi-specific antibodies. They cover targets such as PD-1/CTLA-4, PD-1/VEGF, and PCSK9. A great example of a Chinese company that aims to be a global leader, Akeso currently has trials ongoing in China, the United States, Australia, and New Zealand.

Ascentage Pharma (HKEX: 6855)
Ascentage Pharma began trading on the Hong Kong Stock Exchange in October of 2019. The company develops small molecule drugs in two scientific areas: apoptosis targeting compounds and tyrosine kinase inhibitors. It currently has eight drug candidates in more than 30 trials. For the most advanced program, a BCR-ABL inhibitor currently named HQP1351, a new drug application (an application for commercial approval) was submitted in China in June of 2020 so it is possible that Ascentage might become a revenue generating company in the near future.

Burning Rock Biotech (Nasdaq: BNR)
Burning Rock began trading on Nasdaq in June of 2020. The company is focused on developing genomic sequencing products for cancer in China. This means they will sequence a patient’s tumor and try to tell the physician which drugs might work best for the person based on the specific genetic sequence of the cancer. The term for this is precision medicine. Burning Rock is also working on tests that will help with early cancer detection.

Fudan-Zhangjiang Bio-Pharmaceutical (HKEX: 1349)
Fudan-Zhangjiang’s primary listing is on the Hong Kong Stock Exchange, and last year it also became the first biotech company to announce a secondary stock listing on the STAR Market in Shanghai (The STAR Market is a stock exchange in mainland China devoted to technology and biotechnology companies. It is a subsidiary of the Shanghai Stock Exchange, one of the two main stock exchange companies in mainland China). The company sells various medicines in China one of which is LIBOd, a doxorubicin hydrochloride liposome injection for the treatment of AIDS-related Kaposi’s sarcoma.

Genetron Health (Nasdaq: GTH)
Genetron began trading on Nasdaq in June of 2020. The company specializes in the genomic sequencing of cancer for the purposes of early cancer screening, diagnosis, and monitoring. Genetron also partners with pharmaceutical companies and other researchers to help them develop precision cancer medicines. Genetron’s Chairman, Wei-Wu He, Ph.D., is also the Chairman and CEO of CHNA ETF holding CASI Pharmaceuticals. Read the interview with Dr. He we conducted last year to hear his thoughts about the future of China’s biopharmaceutical sector.

Henlius Biotech (HKEX: 2696)
Henlius Biotech began trading on the Hong Kong Stock Exchange in September of 2019. It is a unit of CHNA ETF holding Fosun Pharmaceuticals. Henlius aims to be a global leader in the development and commercialization of biologic medicines and biosimilars, which are the generic drug version of innovative biologic medicines. Already a commercial stage company, its Rituximab biosimilar is approved in China and its Trastuzumab biosimilar was recently approved by the European Union. The Transtuzumab approval was historic because it is the first biosimilar by a Chinese company ever to be approved in Europe.

Hepalink Pharmaceutical (HKEX: 9989)
Hepalink began trading on the Hong Kong Stock Exchange in July of 2020. It is the largest supplier of Heparin in the world, a main ingredient in many blood thinners. However, the company is more than just Heparin. It has recently partnered with other biotech companies on the development of medicines for cancer, pneumonia, and other indications. In our view, this is a good example of a Chinese company that traditionally had simply manufactured pharmaceutical ingredients, but is now aiming to diversify into innovative drug development to perhaps better meet the needs of China’s future healthcare market.

Hua Medicine (HKEX: 2552)
Hua Medicine began trading on the Hong Kong Stock Exchange in September of 2018. It was the second pre-revenue biotech company to have its primary listing in Hong Kong under the exchange’s new biotech rule adopted in 2018 that allowed such companies to list. The company is focused on the development of its diabetes medicine Dorzagliatin, a novel glucokinase activator. Hua Medicine has had a string of good news lately. It announced positive trial results for Dorzagliatin both as monotherapy and in combination with the commonly used diabetes drug Metformin in trials in China. With these results in hand, one thing the company aims to achieve over the near-term is to partner with a larger company to help bring this medicine to diabetes patients throughout the world. It also plans to file for the drug’s approval in China once its current studies finish a second stage of testing.

Immunotech Biopharm (HKEX: 6978)
Immunotech began trading on the Hong Kong Stock Exchange in July of 2020. As the name hints at, the company is focused on cancer immunotherapy research. It has CAR-T and TCR cell therapy programs, and a platform that it calls EAL. EAL is a preparation of patient-specific expanded and activated T-cells, such as CD3+ CD8+ cytotoxic T cells, that is being studied in indications such as the prevention of postsurgical recurrence of liver cancer. It is currently in phase 2 trials in China for this. The company also has plans to test EAL in gastric, lung, glioma, and colorectal cancer.

InnoCare Pharma (HKEX: 9969)
InnoCare began trading on the Hong Kong Stock Exchange in March of 2020. The company is focused on developing drugs for cancer and autoimmune diseases. Its most advanced drug is Orelabrutinib, a BTK inhibitor that the company has already filed for approval in China in two types of cancers. The drug is meant to be delivered once daily at a low dose, as the company believes it has more complete inhibition of BTK than other similar drugs. InnoCare is also developing a pan-FGFR inhibitor, a selective FGFR4 inhibitor, a pan-TRK inhibitor, and a TYK2.

Kintor Pharmaceutical (HKEX: 9939)
Kintor began trading on the Hong Kong Stock Exchange in May of 2020. The company is a research based organization that focuses on prostate cancer, breast cancer, liver cancer, and alopecia. Its most advanced drug, Proxalutamide, is a second generation AR antagonist. This drug is currently in phase 3 testing for prostate cancer in China and is also in a phase 2 study in the United States. Other drugs under development include an AR antagonist for androgenetic alopecia, an angiogenesis inhibitor, an mTOR kinase inhibitor, and a Hedgehog/SMO inhibitor.

Lee’s Pharmaceutical (HKEX: 950)
Lee’s has been listed on the Main Board of the Hong Kong Stock Exchange since 2010. The company has over 25 years of history in the pharmaceutical industry in China. Its primary focus has historically been on the cardiovascular and infectious disease areas, but it has drugs launched today in a variety of areas including post-operative nausea, depressive disorder, urinary tract infections, and iron deficiency anemia just to name a handful. It’s development pipeline today covers eight areas of focus. Lee’s also has a big opthamology business, which it has recently announced it might spin off and list as a separate unit on a yet undermined stock exchange.

Legend Biotech (Nasdaq: LEGN)
Legend Biotech began trading on Nasdaq in June of 2020. It is a CAR-T company that is most famous for its BCMA CAR-T program for multiple myeloma. In 2017 Legend signed a world-wide collaboration with Johnson & Johnson for this program. In our view, this is the great example of an established multinational company partnering with a Chinese biotech to gain access to innovative science. Already in the advanced stages of testing, Johnson & Johnson has said that it will initiate its application for commercial approval of the BCMA program in the United States by the end of 2020 and in Europe in early 2021. Legend recently announced that its Chairman and founder, Frank Zhang, would take over the CEO role after a successful initial public offering on Nasdaq.

Ocumension Therapeutics (HKEX: 1477)
Ocumension began trading on the Hong Kong Stock Exchange in July of 2020. Established in 2017, the company is focused on developing products for ophthalmology. Ocumension says that it has 16 drugs in development, including three that are in or near the commercial stage. It also aims to be a partner of choice for other ophthalmology companies from outside of China that are looking for help with establishing a China strategy. It has already partnered with companies from the United States, France, and Japan in this fashion.

Thank you for your interest in the China BioPharma ETF. Please be sure to sign up for email alerts below if you would like to receive notification of news, company interviews, and research that we publish from time to time.

Opinions expressed are those of the author or Funds and are subject to change, are not intended to be a forecast of future events, a guarantee of future results, nor investment advice. Fund holdings and allocations are subject to change at any time and should not be considered a recommendation to buy or sell any security. Johnson & Johnson is not a holding of the fund or affiliated with the fund.