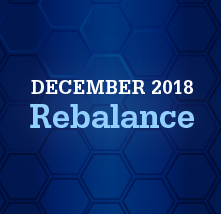 December 18th marked the semi-annual rebalance and reconstitution of the Cancer Immunotherapy ETF’s (Nasdaq: CNCR) underlying index. This happens in two steps. First, a committee of advisors that oversees the index gets together and determines the reconstitution, which means they decide if any new companies should be added. Second, once the index’s holdings have been finalized, a rebalance occurs and each company is given equal weight. CNCR ETF then places trades to replicate those changes as closely as possible. View all holdings of the Cancer Immunotherapy ETF.

Brad Loncar, CEO of Loncar Investments and Chairman of the Index Committee, had the following comments, “I am excited about these new additions and the next-generation technologies they are researching that may lead to important advances for patients. Five of the seven companies we are adding have market values in excess of $3 billion. Furthermore, the lowest market value company in the basket today is approximately $600 million, which compares to approximately $350 million one year ago. As immunotherapy’s role in cancer care advances, we expect larger companies to be more represented in its development.”

To help the fund’s investors and followers learn more about these additions, we have provided a brief background on their work and what sets them apart. The CNCR ETF is thrilled to welcome each of these companies to the fund.

Allogene is an example of a company working on next generation cell therapies that use cells derived from healthy donors rather than the patients themselves. The term for this is “allogeneic.” As its name suggests, Allogene is focused on this approach. You can read more about the technology behind allogeneic cell therapies in the deep-dive research report we published in October on the topic.

One of the most notable things about Allogene is the pedigree of the management team. Its Executive Chairman is Arie Belldegrun and the CEO is David Chang. You might remember how these two gentlemen led CAR-T pioneer Kite Pharma (Dr. Belldegrun was Chairman and CEO and Dr. Chang was Chief Medical Officer) until Gilead Sciences acquired Kite for $11.9 billion last fall. Given their experience, we think it says a lot about where the field might be headed considering how they have chosen to bet on an allogeneic future with their new company.

argenx aims to develop a pipeline of next-generation antibodies. Its biggest news in cancer immunotherapy happened just two weeks ago. On December 3rd, the company announced a worldwide collaboration and license agreement with Johnson & Johnson’s affiliate Cilag for argenx’s cancer immunotherapy drug Cusatuzumab. This is an antibody that targets an immune checkpoint called CD70 and is currently being developed for acute myeloid leukemia (AML) and high-risk myelodysplastic syndromes. argenx received an upfront payment of $300 million and Cilag purchased $200 million of argenx shares.

In addition to the CD70 antibody, argenx also has plans to develop cancer therapies that target MET (a tumor growth factor) and GARP (another immune checkpoint). Outside of cancer, it is also developing antibodies for autoimmune diseases. Autoimmune problems arise when the immune system acts abnormally and impacts healthy cells. argenx’s main autoimmune program aims to treat a condition called idiopathic thrombocytopenic purpura. A little known fact is that the company’s antibody technology is based off of research from the immune system of llamas. It is amazing where scientific discoveries can sometimes be found in nature.

Forty Seven is entirely focused on a cancer immunotherapy target called CD47. Often called the “don’t eat me” signal, CD47 is a protein found on the outside of cells that causes macrophages to not attack them. Macrophages are an important component of the immune system because they are usually first onto the scene to kill abnormal cells and pathogens. After doing that, they tell other immune cells like T-cells what the signature of the abnormality was to in order to set off a wider immune response. By overexpressing CD47, tumor cells are sometimes able to prevent macrophages from acting in this important role when in comes to cancer. Forty Seven aims to block CD47 with its therapies.

The company presented data from two clinical trials of its lead program 5F9 at the big American Society of Clinical Oncology (ASCO) annual meeting in June in patients with non-Hodgkin lymphoma and advanced solid tumors. 22 advanced non-Hodgkin lymphoma patients were treated with a combination of 5F9 and rituximab. In a subgroup of 15 patients with diffuse large B-cell lymphoma, 40% responded to the combination and 33% saw a complete remission. In a subgroup of seven patients with follicular lymphoma, 71% responded and 43% saw a complete remission. The data was subsequently published in the New England Journal of Medicine on November 1st. Additionally, in a monotherapy trial of 5F9 in advanced solid tumors, two ovarian cancer patients showed a response to the drug alone. Monotherapy responses are key because they suggest the drug is active without any help.

Moderna had a record-setting initial public offering (IPO) on December 7th. It raised over $600 million (the most money raised in biotech IPO history) at an $8.1 billion valuation. The company is focused on trying to harness messenger RNA (mRNA) to treat disease. mRNA’s natural role is to take genetic instructions from DNA in the nucleus of your cells and use this information to tells ribosomes what proteins to make. The goal behind the company’s science is to insert synthetic mRNA into cells so that its therapies can tell those ribosomes to create any protein the company wants. Since many medicines are proteins, it would be like turning your cells into mini pharmaceutical factories. While this might sound simple in concept, biology is complicated and there are many hurdles to delivering mRNA to the right place and making it work in reality. That is what Moderna is aiming to prove it can do.

The company has a major partnership for using mRNA as a cancer immunotherapy modality with Merck, a leader in the immunotherapy field. The two companies currently have a trial ongoing for a cancer vaccine that is meant to use mRNA to illicit an immune response that is tailored specifically to the unique signature (neoantigens) of each patient’s cancer. Moderna and Merck also plan on launching a clinical trial together for a vaccine that targets an oncogene called KRAS, a characteristic that is common to many cancers. In addition to the Merck partnership, Moderna has wholly owned programs in cancer to use mRNA that is directly injected into tumors to make therapies that target immune checkpoints and others that produce immune boosting cytokines.

Regeneron has been a late entrant to the cancer immunotherapy field, but has been coming on strong lately. For example, in partnership with Sanofi, the company recently had its PD-1 inhibitor Libtayo approved by the Food and Drug Administration (FDA). PD-1’s have revolutionized the treatment of many types of cancer like melanoma and non-small cell lung cancer. Only a handful have been approved so far, such as Merck’s Keytruda and Bristol-Myers Squibb’s Opdivo, so this puts Rengeneron in an exclusive class for now. In this case, Libtayo has only been approved for a rare type of cancer called advanced cutaneous squamous cell carcinoma, but Regeneron is conducting trials with it more widely and will use the drug as the foundation for many immunotherapy combinations.

In addition to the PD-1, Regeneron is also becoming a leader in bispecfic antibodies. This caught the field’s attention at the 2018 American Society of Hematology (ASH) annual meeting in San Diego in early December. The company presented data from its bispecific antibody REGN1979 in a trial of advanced non-Hodgkin lymphoma, including the follicular lymphoma subtype. REGN1979 targets a protein called CD20 on cancer cells and another called CD3 on T-cells. The idea is to activate the T-cells only when both of these targets are hit and the T-cells are next to tumor cells. Out of 10 patients with the follicular lymphoma subtype who were treated with 5 milligrams or more of REGN1979, 100% responded to the drug and 80% experienced a complete remission. These promising results highlighted Regeneron’s new role in the cancer immunotherapy landscape.

Seattle Genetics is most famous for being a leader in the antibody-drug conjugate (ADC) approach to treating cancer. An ADC takes an antibody that recognizes a target on a cancer cells and attaches it to a toxic therapy, like chemotherapy, via a linker. The idea is to have the ADC home in on the cancer like a tracking device and deliver its toxic payload to kill the cancer cells. The company’s main product, Adcetris, has been approved for a handful of cancer types since 2011 and will earn over $400 million in sales throughout the United States and Canada in 2018. It also has a deep pipeline of other ADCs in clinical development behind it.

Lately the company has also been focused outside of ADCs and more broadly on cancer immunotherapy. It has four immunotherapy programs currently enrolling patients in clinical trials and others in preclinical development. First is SEA-CD40, a sugar engineered antibody that targets an immune-activating receptor found on many types of cancers called CD40. Second is SGN-2FF, an oral immunotherapy drug that inhibits a process that is increased in cancer called fucosylation. Third is ACTR-BCMA, an antibody- coupled T-cell receptor therapy in partnership with Unum Therapeutics targeting BCMA for multiple myeloma. Fourth is SEA-BCMA, a sugar engineered antibody of its own that targets BCMA. Lastly, Seattle Genetics inked a deal in February of 2018 with Pieris Pharmaceuticals to develop various bispecific antibodies.

Y-mAbs Therapeutics is currently focused on pediatric brain cancer. It had its initial public offering in September. The company’s antibody technology came from Memorial Sloan Kettering Cancer Center in New York. While it is new to the stock market, Y-mAbs has pivotal trials ongoing for two therapies against brain cancer indications. The first targets GD2 and is being tested against relapsed/refractory neuroblastoma and the second targets B7-H3 and is being tested against central nervous system/ Letomeningeal metastases from neuroblastoma. There is also a bispecific antibody program that was just cleared by the Food and Drug Administration to begin trials that targets DG2xCD3 and one that is in preclinical (before human-stage) testing that targets CD33xCD3.

One thing that has drawn us to this company is its goal to be a leader in developing better therapies for children with cancer (it also is developing treatments for adults). Sometimes research has been lacking when it comes to pediatric cancers so it is nice to see a company that is trying to change that. Also, brain cancers like neuroblastoma are some of the most difficult to treat. In fact, there are no drugs currently approved by FDA for neuroblastoma after it has advanced past the first line of treatment so this is a big unmet need. We applaud Y-mAbs for this combination of focusing on an underserved patient population and a big unmet need. It is exactly the type of work the Cancer Immunotherapy ETF aims to support.

Thanks, as always, for your interest in the field of immunotherapy and support of the Cancer Immunotherapy ETF. We are pleased to welcome these new companies to the fund and wish them the best as they work to make a difference for patients.

Opinions expressed are those of the author or Funds and are subject to change, are not intended to be a forecast of future events, a guarantee of future results, nor investment advice. Fund holdings and allocations are subject to change at any time and should not be considered a recommendation to buy or sell any security. Cilag, Johnson & Johnson, Pieris Pharmaceuticals, Sanofi, and Unum Therapeutics. are not a holding of the Fund or affiliated with the Fund.